We had the largest team so far in the Kanin caves during past holidays. At the same time, we were exploring two thousand-meter caves: Renejevo brezno and P4. Because the palette of impressions and adventures is most colorful, I will only summarize the main findings, and the experiential writings of particular teams will come later. But first let me say that the campaign was super successful. 13 people at the same time caving for 6 days without a hitch, we only forgot a piece of butter, a chisel and an inflatable.

Pre-action took place on Sunday, December 23. Uroš, Beki, Matija, Lojze, Aja, Matic, Mršek, Roli, Bowie (sherpa dog), Lanko and myself carried the first round of gear to the JZS (Speleological Association of Slovenia) bivouac. At Skalar hut we also met a team of JZS people who kindly helped us with the load (thank you very much).

On Tuesday, December 25 the action proper began. We took the cable car to the D station, and continued on foot to the bivouac on the Kanin plateau. We entered both caves the very same afternoon.

Marko, Klemen, Filip and Matija went to Renejevo brezno. They descended to Gabrček bivouac (-700) and to the bottom of the cave the next day. Along the way, Matej caught up with them and saved the team from drifting in side tuneels. To P4 we went in two teams: Mršek, Jure, Diba and myself rolled down to bivouac Stella (-950, extreme south-east part of the cave), Vid, Luka and Lojze descended to Houston bivouac (-650). Each of us was lined with at least two transport bags, so it took us to the bottom of the cave two to three times longer than usual. Along the way, we de-rigged the completed question marks from previous actions, thus obtaining additional meters of rope.

On Wednesday the Houston team, reinforced by the late Garmin, erected a new emergency bivouac at Infinitum (-950) so they wouldn’t have to climb back to Houston every day. They started digging towards René, but the draft was tricky – the inversion on the surface took away the normal winter draft. Even if there was some air current, it blew a little here, a little there, the strong Kanin draft was nowhere to be felt. It was not until the last days of our expedition that we experienced the true face of the Kanin wind. In the evening, they spoke with the René team for the first time over a cordless phone. The P4 teams communicated successfully via vox. Talking to other teams greatly boosts the morale and cohesion of the campaign. The Stella team attacked the wall at ​the SE, where we aimed to get past the collapse to continue the fossil galleries to the south. At the same time we were exploring a water collector running toward the NW. Fortunately, the water level dropped so much that we didn’t miss the forgotten boat. The first ascent ended again in the collapse and continuation along the collector stopped at the first suspended siphon.

On Thursday and Friday, René and Houston teams worked to connect the two caves. They managed to hear a hammer thunder from the other cave, and they began digging and climbing against the fellow cavers. The draft still was of no use. However, they have made considerable progress in audio contact, although they have not yet been able to talk from one cave to another without the phone. We of the Stella team proceeded along the collector back towards the NW, all the way to the Infinitum hall, where the collapse stopped us. With a little additional effort we will be able to follow the water further. It will be most interesting to see the confluence of all the water flows directed towards the same destination, somewhere beneath the large Infinitum collapse. The other part of Stella team, the brilliant climbing duo Mršek and Diba, climbed the 70 m chimney and, after some strange and inexplicable re-rigging, achieved exactly what we were looking for. Continuation of the fossil galleries, direction Mala Boka, with a solid draft (when it started to blow).

On Saturday, the René team headed for the surface, as did half of the Houston team. Luke and Vid stayed in the Infinitum and put all their power into the connection. They found a bunch of new outlets, but no sign, that they reached René. Although they felt the imminent presence of René cave, they had to admit in the evening that the physical connection would have to wait until the next time. We, the Stella team, continued the work in the tunnel. We descended into the active abyss that cuts through it, but we could not reach the bottom of it. Is it possible that we crossed the threshold where the waters finally flow south? A couple more traverses in the gallery and we stopped at a 10 m ascent. An open sequel waiting for us the next time.

On Sunday, the Stella team and the rest of the Houstonians set off for the sun. At Houston we were surprised by Matej, for whom René was not enough and he came to help us carry the equipment. We were equally delighted by Cyril and Jaros, a couple of pits higher. We looked into the windy night just after 8pm. At JZS bivouac, all three teams reunited and a night of storytelling and cheering followed. On Monday, on New Year’s Eve, we carried all the stuff to Peter Skalar’s hut, where we were joined by a pile of guys of the surface team, to celebrate together the successful campaign and the transition to the new year. A sincere thanks goes to Sončni Kanin / The Sunny Kanin Inc. for the aid with cable car transportation. Without it Kanin exploration would be much harder! At the same time, the friendly smiles and encouragement of the cable car people always make our day more beautiful and share with us the idea that Kanin is our common pearl. Thanks also to the sponsor of this expedition, Diba s.p. (independent entrepreneur), who provided for the extra costs we had with food and equipment. And, of course, to David Škufca, who made the best New Year’s Eve dinner – let your cauldron continue to favor you ;). To sum up – the campaign was one of the most successful, in all respects. René and the P4 team communicated with a hammer and a sledge hammer at a depth of 1000 m, in addition to successful small talk over a cordless cave phone (entrances are 1 km apart). P4 map received a bunch of new question marks and approximately 700 m of new polygon. Aspiring new cavers were tempered and seasoned in the demanding cave, friendships got stronger and more intense, science gained a few more Kanin underground species, and the society a promise that we would not run out of meters (of new cave tunnels).

A sincere thanks to Sunny Kanin Inc. once again. Without you, exploring Kanin would be so much harder! Friendly smiles and encouragements of the cable car people always make our day more beautiful, it is splendid to know that Kanin is our common pearl.

Photos can be found at the following link.

Translated and posted by Primož Jakopin, December 30, 2019, updated January 9, 2020, after the Slovenian version, contributed by Špela Borko on January 4, 2019.

The first of several siphons that crossed our path. Photo by Špela Borko

10 meters above the siphon there is a fossil tunnel which took us forward. Photo by Matic Di Batista

Not a smoking commercial, but it's still the most "hard core" picture of this campaign! Photo by Matic Di Batista

Cyril helped us carry the transport bags out. Photo by Vid Naglič 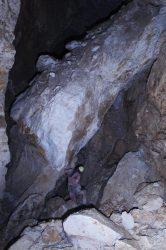 What's in there? The Rene climbing team has discovered a lot of new. Photo by Marko Rakovac

Selfie again, this time at the beach. Photo by Marko Rakovac

The only photo of Matic. He says we have him for cave inventory. Will be the star of the album next time. Photo by Jure Bevc

The group photo on New Year's Day. By Uroš Kunaver